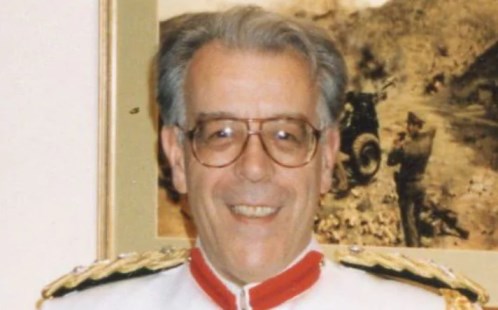 In October 1990 Strong joined the HQ in Saudia Arabia of General Sir Peter de la Billière, who had been appointed C-in-C British Forces for the 1st Gulf War. As Assistant Chief of Staff (Support), with responsibilities for logistics and personnel, one of his tasks was to protect captured Army and RAF personnel and negotiate their release without giving away too much information about their role in the conflict.

The pressure was considerable and sometimes involved working for 20 hours at a stretch. He also had to oversee the importation to the Kingdom of “sensitive stores.” These included wine for Communion, which eventually cleared the customs authorities as “heavenly lubricant.”

William Ernest Strong was born on April 4 1943 at Burton-on-Trent, Staffordshire. After leaving school he tried everything, he said afterwards, from chartered accountancy to jazz drumming before joining the Army in 1963.

He completed his basic training at Mons and was commissioned into the Royal Artillery. A posting to 35 Battery RA in BAOR was followed by a secondment to Aden. He joined the gunners’ team training the South Arabian Army and subsequently commanded a troop at Beihan garrison, East Aden Protectorate.

After several exacting tours in Northern Ireland on internal security duties, in 1972 he joined Cracker Battery in the Oman. He was attached to local forces fighting for Sultan Qaboos against insurgents in the Dhofar region.

As adjutant of 25th Field Regiment RA, Strong was at Catterick Camp in Yorkshire organising the Regiment’s move to Munsterlager in Germany, when an IRA bomb exploded in a coach on the M62 causing many casualties among off-duty soldiers and civilians.

A posting to the British Embassy in Washington, followed by a spell with 45th Field Regiment RA in BAOR and Northern Ireland, led to a posting to the Military Secretary Branch at Stanmore. After commanding the OTC at Cardiff University he was offered a three-year posting to Belize. “I managed to avoid this,” he recalled. “The officer I was meant to succeed sent me a photograph of himself with a boa constrictor around his neck.”

He served at the British High Commission in Ottawa before returning to England to assume command of the Proof and Experimental Establishment at Shoeburyness, Essex. To get around different locations on Foulness Island they used Kitchener’s railway coach from the Sudan.

After returning from his duties in Saudi Arabia during the Gulf War, he moved to the weapons ranges in the Outer Hebrides. These were places, he said, where pyromaniacs could thoroughly indulge themselves.

Operations were not without their hazards. On one occasion during field testing he was run over by a tank. Fortunately, the tank was small, the ground was soft, and he quickly recovered from his injuries.

His final appointment was that of defence attaché for Saudi Arabia, Bahrain and the Yemen, based at Riyadh. In 1999 he retired from the Army and moved to South Wales, where he became Honorary Colonel of the University of Wales OTC.

He started a successful business dealing in military medals; he had begun collecting as a cadet at Mons when he purchased a Waterloo medal. His collection covered a wide range of campaigns.

To the question of why sell medals, his reply was: to give others the pleasure of being temporary custodians of these wonderful mementos of service and bravery, and also to preserve for posterity the lives and careers of people who otherwise would be forgotten.

He supported several charities including the Prince of Wales’s Trust and St John Ambulance.

He married, in 1973, Angela Crosse-Kelly, who survives him and who was the sixth generation of her family to “follow the drum”.

Note: here is the link to a talk that Bill gave to the village in 2018