Graham and Rae moved to the village in 1967. They moved from Cardiff, which is where Rae originated. Graham is from Bolton in the North West of England. Before moving to the Old Post Office, they lived in two other houses in the village, which they built.  Graham’s former occupation was a chartered civil engineer. He worked for the Glamorgan River Authority.

The houses of the village

In 1967 their first house was Woodside, a rendered house on the lane behind the Bush. Graham and Rae bought the land to build the house from Lindsey Thomas, a farmer who lived in the Glebe farmhouse and subsequently a bungalow which is now a two storey house called Y Bythyn.

From Woodside Graham and Rae moved to the opposite side of the lane. They bought a plot of land from the then owners of Kninkin cottage. Here they built Elm Tree Cottage. The Lloyds, who owned Kninkin, sold the cottage after having White Lodge built.

When Rae and Graham moved to the lane there was only Kninkin cottage and two other houses there – the Paddocks and the Covet.

Graham bought Springhill in the mid 1980s. He renovated it and sold it to Colin White, the current owner. Springhill was previously called Cross Cottage. Muriel Crockatt lived in the Nest at the Cross, which is next door to Springhill. 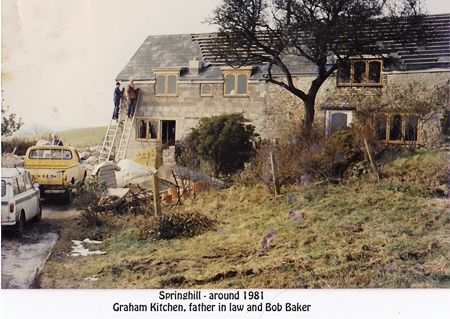 Rae and Graham gained planning permission to convert outbuildings behind their house into a bungalow, now known as Beechwood. Rae’s parents moved in. The outbuildings had previously been used for milking the cows that were brought up from the mine pit fields (down the lane behind the Bush Inn).

Graham bought land from Ralph Thomas and built Sefton House. The land was formerly part of the Village Farm orchard.

He went on to buy the land on which Burnaby House (formerly called the Hussons) now stands from Fred Elton Jones, who had bought Village Farm from Ralph Thomas. At the time the land on which the houses the Orchard and Hendre now stand still belonged to Ralph Thomas. Ralph’s sister and her husband built the Orchard, where the Coggins family currently live and they built Hendre, which was where the milking parlour once stood.

On the site of Old Hall Cottage there were originally three cottages. After the second World War the Crescent houses were built and villagers moved into them from the cottages. The cottages were substantially demolished and the land restored by Jeannie Griffiths husband.

Lansdowne is on the site of two old cottages which were rebuilt into the present bungalow in the 1960s.

It is thought that Dick Holt and his wife were the first occupants of Kelowna, 2nd house on the right behind the Bush. He was an airline pilot with Cambrian Airways. He later moved to work at Heathrow airport.

Here's a photo of Graham and Fred Elton-Jones, of Village Farm and and Martin Stone of Lansdowne moving a piano for a village function - Fred was actually playing the piano (c1980s) - note the business name on the truck. 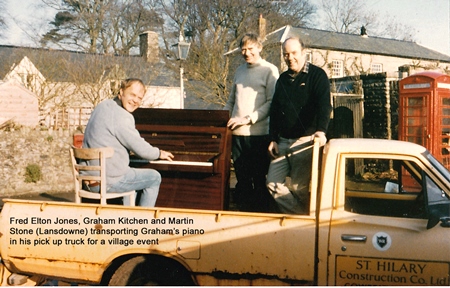 Rae and Graham had wanted to own the Old Post Office from the very first time they set eyes on it – before moving into the village they often drove up to the Bush for a drink. At that time the bypass hadn’t been built. It was opened on 27 September 1966 . So, when Graham heard a rumour in 1972 that the Old Post Office was coming up for sale he went to the Estate Agents in Pencoed and bought it – without viewing it! The property cost £10,000 including the business - a shop and post office was run from what is now Rae and Graham’s kitchen. 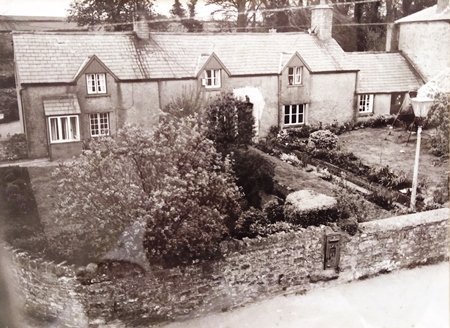 The emergence of supermarkets in the 1980s had a detrimental impact on village shops and when Rae and Graham closed their shop and post office Beryl Price took over the post office and ran it from Myrtle Cottage, which was rented from Elizabeth Giles. Miss Giles bought Myrtle Cottage when Aneurin David died. When the Price’s moved to the Crescent the post office continued to be run from there. When Beryl gave it up Rae and Graham took it over again for a short period – running it on a part time basis from the garage at the back of their property. As a hobby they also ran a Village Framing business from home.

The purchase of the Old Post Office also included Corner Cottage which was subsequently sold to Les and Betty Jones, who lived at Springhill. Before selling Corner Cottage it was rented out to John and Elsie Rees and John’s sister Annie who had previously run the post office from Abbotswood. 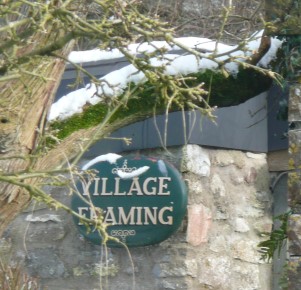 Graham was a bellringer in St Hilary Church with Ken Vaughan - here's an article about bellringing in the village.

Here are some photgraphic memories of The Old Post Offce: 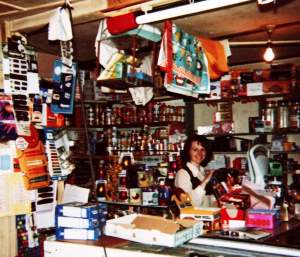 And here are two photographs of Graham and their son, Adrian, getting their entry ready for a sunflower competition in the early 1980s

The Bush (here's the link to the history of the Bush)

The pub belonged to Welcome Inns who owned several pubs. Mel Barnet, formerly the landlord of the Ship Inn in Barry, was the landlord when Rae and Graham moved to the village.

Graham recalls that the Bush Inn was altered a few years before they moved to the village. The end bar, where you could play darts, was a coach house. There were big double doors at the front where the bay window is now. Mel had the doorway knocked through from the middle to the end bar, which was used by the locals, because the middle bar was always full and the end bar was quiet. There was a view that this was the beginning of the end of the locals bar. There was originally a cottage in the car park of the Bush. It is not clear when it was demolished.

Hay making in the past was a village affair. Graham recalled how locals would help Lindsey Thomas with his haymaking. Their reward for working in the fields all day was the promise of a pint at the Bush. When they arrived for their well earned drink Mel would have around 10 pints of beer lined up on the bar and would replenish them as soon as they were finished.

Mel successfully ran the Bush Inn with his wife Thelma. He died in 1990 (date on memorial stone) and his ashes are in the St Hilary churchyard. Thelma was described as a dynamo – she ran the restaurant and bed and breakfast (B&B) when they converted the living accommodation above the Bush. They bought the house behind the Bush where the Hoggett family currently reside so that they could create the B&B business. They were very successful and the B&B was particularly successful because the A48 was busy. There was no motorway at that time. It is thought that the Cowbridge bypass was built around 1967/68.

Graham’s memory of Mel was of him always standing at the hatch in the middle bar chatting to customers with a keen eye on the till. “He never took his eye off the till”

It was bought by Deri Trott. The pub declined and was eventually taken over by Glyn and his wife from North Wales, before being run by the Sylvia Hitchcock and the family. It then passed to Phil Thomas and is currently run by Liz and Andy Hooker.

Mel participated in weightlifting competitions at the Olympics. We recently received an email through the St Hilary website from Mel’s son in law: “I have just been in St Hilary with my wife. Her family ran The Bush Inn in the 1960s and I loved the village. My father in law is buried here. His name is Mel Barnet, and he took part in the weightlifting competition at the 1952 Olympic Games in Helsinki. I hope to come back soon."
Best regards Pedro Mateus

Ivy was born on the 28th September 1915 in the military hospital in Portsmouth. Shortly after her birth her parents moved to Cardiff where she was brought up. She married Raymond and they lived in Cardiff until 1972 when they moved to St. Hilary Post Office, eventually converting the workshops in the garden into a bungalow where she lived.

Rae and Graham recall that the water supply when they moved to the village was from an iron tank on metal stilts in the grounds of Hafod. It was of inadequate capacity and frequently ran out of water. In particular, Eastdown farm would run dry. The new tank is underground on top of the common.